Spending on ads served to internet-connected devices including desktop and laptop computers, mobile phones and tablets will reach $137.53 billion this year, according to eMarketer’s latest estimates of worldwide paid media spending.

Digital spend will be up 14.8% over 2013 levels, according to the forecast, and will make up just over one-quarter of all paid media spending worldwide. That’s up from about one-fifth of spending in 2012, and it is set to rise to nearly one-third of the total by the end of our forecast period, when advertisers around the world will invest $204.01 billion in digital.

The US is still the single biggest spender on digital ads, with North America thus the highest-spending region. Nearly two in five digital ad dollars this year will come from advertisers in North America, compared with 28.6% in Asia-Pacific—where share is actually dropping slightly. Western Europe accounts for nearly one-quarter of all digital spending around the world, and other regions make up just a small share.

Total media ad spending worldwide will grow at a significantly slower pace, hovering around 5% growth for the next several years. eMarketer expects that by 2018, total media spending will reach $656.3 billion.

While the US is the highest spender on digital media in terms of absolute dollars, it’s the UK that sports the highest share of total media spending on digital channels, at 47.5% expected this year. That compares with 40.1% in second-place Denmark, 37.5% in third-place Australia, and 27.9% in the US.

eMarketer bases all of our forecasts on a multipronged approach that focuses on both worldwide and local trends in the economy, technology and population, along with company-, product-, country- and demographic-specific trends, and trends in specific consumer behaviors. We analyze quantitative and qualitative data from a variety of research firms, government agencies, media outlets and company reports, weighting each piece of information based on methodology and soundness.

In addition, every element of each eMarketer forecast fits within the larger matrix of all our forecasts, with the same assumptions and general framework used to project figures in a wide variety of areas. Regular re-evaluation of each forecast means those assumptions and framework are constantly updated to reflect new market developments and other trends.

NEW YORK, NY (April 10, 2014) — U.S. interactive advertising revenues for 2013 hit an all-time high of $42.8 billion, according to the IAB Internet Advertising Revenue Report for the full-year, exceeding broadcast television advertising* revenues ($40.1 billion), for the first time ever. This momentous figure marks an increase of 17 percent from 2012’s landmark revenues of $36.6 billion. The report, unveiled today by the Interactive Advertising Bureau (IAB) and prepared by PwC U.S., also reveals that fourth quarter revenues for 2013 came in at $12.1 billion, an increase of 17 percent from the $10.3 billion brought in during the same quarter in 2012. In addition, this total represents an uptick of 14 percent from 2013’s third quarter revenues at $10.6 billion.

· For the third year in a row, mobile achieved triple-digit growth year-over-year, rising to $7.1 billion during full year 2013, a 110 percent boost from the prior year total of $3.4 billion. Mobile accounted for 17 percent of 2013 revenues, whereas it was 9 percent of revenues in 2012.

· Digital video, a component of display-related advertising, brought in $2.8 billion in full year 2013, up 19 percent over revenues of $2.3 billion in 2012. As a result, it also increased its share to become the fourth largest format, directly behind mobile.

· Retail advertisers continue to represent the largest category of internet ad spending, responsible for 21 percent in 2013, followed by financial services and closely trailed by automotive which account for 13 and 12 percent of the year’s revenues respectively.

“The news that interactive has outperformed broadcast television should come as no surprise,” said Randall Rothenberg, President and CEO, IAB. “It speaks to the power that digital screens have in reaching and engaging audiences. In that same vein, the staggering growth of mobile is clearly a direct response to how smaller digital screens play an integral role in consumers' lives throughout the day, as well as their critical importance to cross-screen experiences.”

“Our survey confirms that we are fully in transition to the post-desktop era,” said David Silverman, Partner, PwC U.S. “Triple digit advertising revenue growth from mobile devices contrasted the more tepid 8 percent growth from traditional computer screens. This is simply a reflection of the change in how and where consumers are viewing their information—on the go!”

Here are the results from the full year in comparison with last year’s numbers: 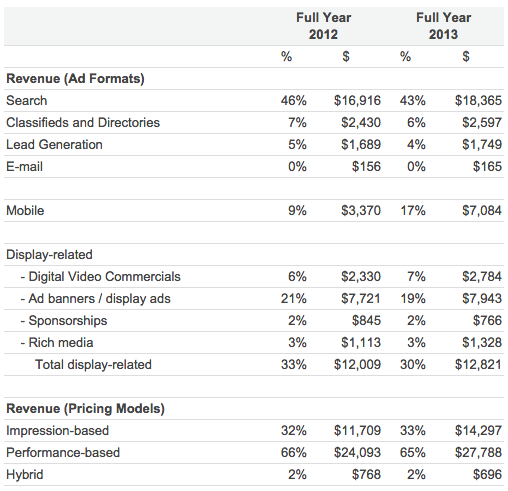 IAB sponsors the IAB Internet Advertising Revenue Report, which is conducted independently by the New Media Group of PwC. The results are considered the most accurate measurement of interactive advertising revenues because the data is compiled directly from information supplied by companies selling advertisements on the internet. The survey includes data concerning online advertising revenues from Web sites, commercial online services, free email providers, and all other companies selling online advertising. The full report is issued twice yearly for full and half-year data, and top-line quarterly estimates are issued for the first and third quarters. PwC does not audit the information and provides no opinion or other form of assurance with respect to the information.

NEW YORK, NY (September 20, 2012)—eMarketer estimates that marketers will spend $37.31 billion on digital advertising in 2012. Digital ad spending will rise 16.6% this year, and will experience double-digit growth through 2014.

At $15.41 billion, Google’s ad revenue alone will account for 41.3% of total digital ad revenues in 2012. Google will see slightly slower growth than eMarketer estimated earlier this year, as the company’s ad revenues for the first two quarters of 2012 were a bit lower than expected.

Despite this factor, Google’s growth will reach 20% in 2012 and remain in the double digits through 2016. By 2014, marketers will spend more than $20 billion on Google advertising, while digital ad revenue at Yahoo!, Microsoft and Facebook will each total just over $3 billion.

Based on the Interactive Advertising Bureau’s (IAB) data for the first quarter of 2012, and because the digital ad spending market is approaching maturity faster than expected, eMarketer has lowered the projected rate of increase for US digital ad spending slightly from its earlier forecast of 17.7% in 2012. However, eMarketer’s outlook remains optimistic—despite slower percentage gains, big dollar growth will continue.

Search continues to be the leading digital ad spending format, although its share will drop this year as the shares of rich media, sponsorships and video increase.

This year, display ad spending growth will outpace that of paid search ad spending, driven by digital video advertising and sponsorships. At a 46.5% growth rate, digital video ad spending will continue to post the strongest gains—though it is starting from a much smaller base. Online and mobile video viewing are becoming increasingly popular. According to eMarketer forecasts, more than half of the US population will view video content through desktop or mobile devices in 2012.

Managerial changes, new company focus and adequate results in the first two quarters of 2012 have led eMarketer to raise the forecast for Yahoo! from a 4.7% decline to 1.7% growth for 2012. Growth will remain relatively flat through 2014. Yahoo! holds the second-largest share of digital ad revenues, at 8.4% of the total. Its share will decline throughout the forecast period as the shares of Facebook and Microsoft increase.

Despite Microsoft’s growing share of digital ad revenue, its Online Services Division, which manages digital advertising (including Bing and MSN), has reported an operating loss for 17 quarters in a row. While Microsoft’s increasing search ad revenue share is an indication of shifts in the overall search advertising market, it is a less accurate depiction of the company’s overall performance in the digital space.

Facebook will experience the fastest growth of digital ad revenue this year, though eMarketer has cut 2012’s forecasted growth in half, to 24.4%, from its earlier estimate. Facebook underperformed eMarketer’s expectations in both Q1 and Q2, and questions have been raised about the effectiveness of some of the site’s ad products—especially its Premium ad offerings—as some high-profile brands have dropped their efforts on the site.

eMarketer bases its estimates for US digital advertising spending and market share on an analysis of reported revenues from company releases; estimates from other research firms on advertising revenues, pricing, impressions and other factors; usage trends at major ad publishers; eMarketer interviews with executives at ad agencies, brands, online ad publishers and other industry leaders; and figures from the Interactive Advertising Bureau and PricewaterhouseCoopers, its benchmark source for overall digital advertising revenues, for which the last full year measured is 2011.

The figures for individual companies represent net US ad revenues after traffic acquisition costs to partner sites and publishers have been factored out, and include advertising that appears on desktop and laptop computers as well as mobile phones and tablets.